A Good Building is Inevitable

LEARNING TO BE INVISIBLE, PART II
​

"However, it can be shown that many prescriptive designs are much less conservative than an engineered solution. This is because the IRC is not based on fundamental engineering, but rather is calibrated to ‘historical acceptable performance,’ which has no engineering definition. Since the IRC does not state the fundamental engineering properties or the factors applied to those engineering properties, the reasoning behind the code provisions can be easily misinterpreted, resulting in engineering-related unintended consequences.”
— Structural Building Components Magazine

西明寺, Saimyo-ji, Takao, Kyoto, Japan. 35mm film, December 2018.
The quality I admire most in buildings I used to refer as “invisibility.” By this I referred to the invisibility of the maker, not the object. As a carpenter, this was always my goal: to disappear into the object, to make it seem as if I were never there. When all the tools were loaded and the last piece of tape had been painted and pulled I wanted the space to feel like it had always been that way, or was always meant to be that way.​ 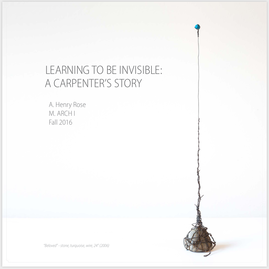 Application Portfolio, click to open pdf in new window.
​It retrospect, it may be that “inevitable” is a better term than “invisible,” because it is the quality that applies to the object itself. What I’m after is a specific relationship betwen the will (intent) and the artifact (made object). Put simply: made objects alone are defined by intentionality. Aristotle refers to this as a “final cause” which indicates that the object’s existence is partially explained by the end or goal toward which the maker was oriented. This is the idea behind “design”— it is a practice of orienting the will toward a goal.

The primary question for designers, as with all free actors, is why choose one thing and not another? The concern is that choices will be arbitrary, and this is a profound dilemma for most architects—it seems—this fight against arbitrariness. For this reason architecture schools laud resoluteness, consistency, and coherence in their students’ work. They preach the holiness of the concept and the parti, that irreducible source from which all else will flow. This works up to a point. For while it is true that a strong concept may guard against an ad-hoc nature of auxiliary decisions, it by no means follows that an architecture that aptly demonstrates its concept in so doing also demonstrates the value of its concept. The concept is just as good or bad as it ever was—the argument is a tautology.
​The second problem, though, is more concerning. This has to do with the unequivocal value which is placed on acting resolutely according to a preconceived plan—in other words, the value of design itself. My suspicion is this: namely, if you accept my argument that the real concern for architecture is the fight against arbitrariness, the obsessive focus on internal coherence between object and parti will never succeed in achieving this goal.

This will become more clear when we contrast artifacts, to return to our original discussion, with natural objects, which we can understand as those that exist without human intervention. The point here is simple. Nature is anything but arbitrary. Barring metaphysical or cosmogenic questions, nature is definitionally inevitable: the kaleidoscopically complex but nonetheless fully explainable total set of interactions: each moment the product of the last, ad infinitum. Part of what lends credence to this sense of inevitability, if we look at nature in a purely formal light, is its tremendous variety. While it remains highly ordered, it is never repeated, mirrored or duplicated. Think of trees: each specimen is unique in the way it has adapted to its local position and responded to specific, peculiar stimuli. This quality of adaptation is not only intrinsic to natural things but also can be seen in diametric opposition to the type of “designed” objects humans make, that are guided into being through an idea of their final form.

No tree knows what it is going to become, it simply knows how to grow. This is the instructive point: for this incremental, adaptive quality that proceeds according to imperceptible rules is precisely what lends to natural things their sense of inevitability. If architects wish to inflect their work with a similar quality, I think they could learn from this example. Rather than rigorously adhere to a conceptual diagram, they could teach their buildings how to grow.
Of course architecture will never be inevitable like a tree is inevitable, but it is not inconceivable to design systems of building that are based on rules instead of outcomes. Form does not have to be fixed. A different kind of order can result which is responsive and idiosyncratic. In this system deviations from the plan are not compromises or mistakes but opportunities to explore nuance, to generate variety, and to celebrate complexity. On site, relative measurements would be made instead of absolute ones, and in general, the logic of construction would prevail. ​
In a way this represents a distinct shift of prevailing design philosophy, away from a system in which the designer seeks to define an absolute maximum number of variables needed to accomplish the task (i.e. a virtual copy) to a system which aims to provide a minimum amount of information. The need for total control is not an axiomatic position, but only necessary if the goal is to produce specific outcomes. I think it is time we disabused ourselves of the idea that this is the only way to design. For ultimately it is not form, but that which informs, which is the hallmark of strong architecture—of buildings that feel inevitable, coherent, like they were meant to be. 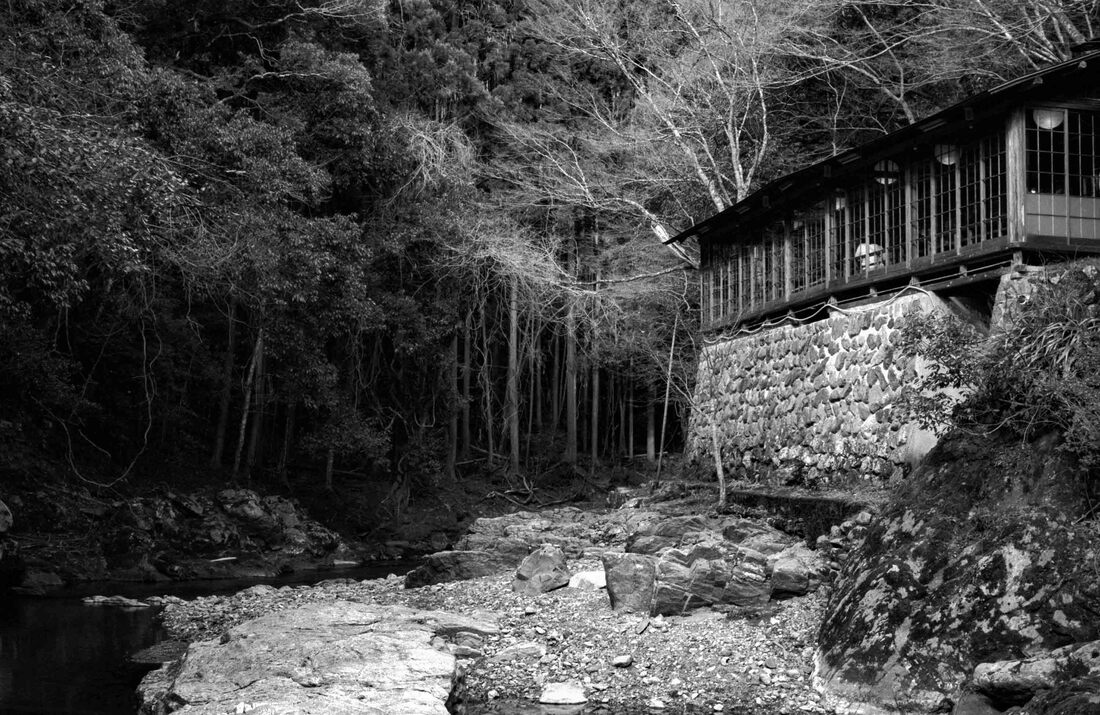 瓦そば 松右衛門, Soba Noodle Shop, Takao, Kyoto, Japan. 35 mm film, December 2018.
​*​
© A. Henry Rose, 2021. Excerpts and photos may be re-published provided that full and clear credit is given and directly linked to the original content.