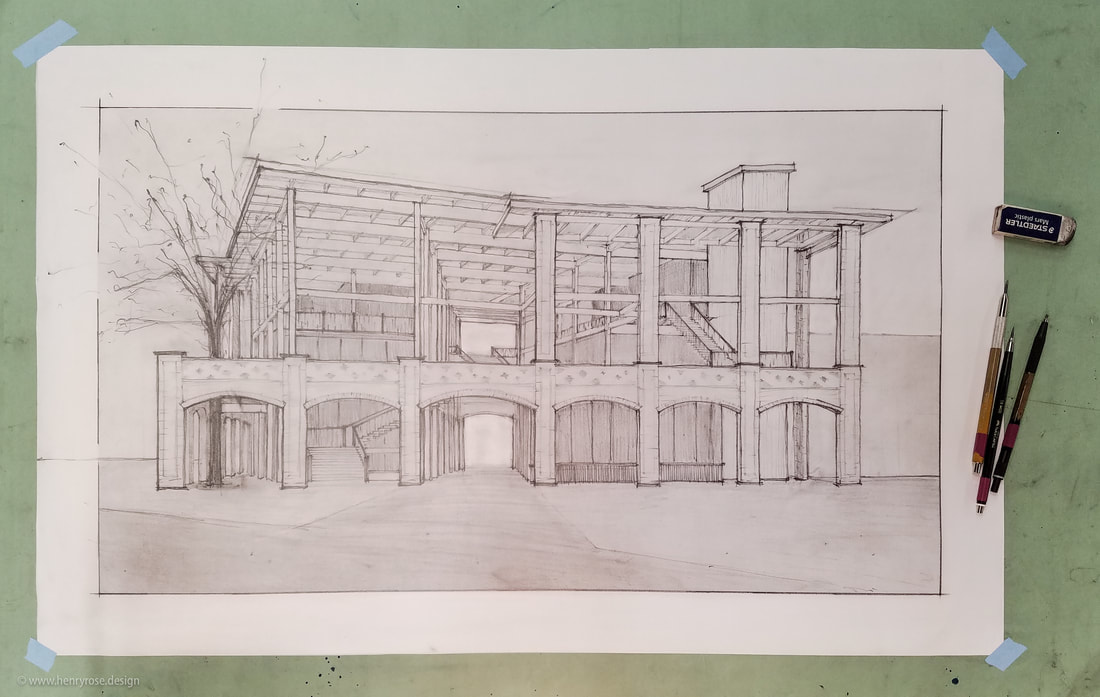 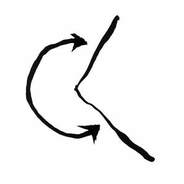 My goal is to turn buildings inside out. The built environment should consist of more than inhabitable, conditioned space with a purely visual relationship to the exterior surface. The outside of buildings, in other words, should be as livable as the inside. The problem is geometric: if the building is construed as a closed figure (however elaborate) its exterior angles will each be definitionally greater than 180 degrees — what is called a reflex angle — and where no one, instinctively, wants to be. The typical street condition across the country is made up of these spaces, almost exclusively. It could even be said that streets are geometrically hostile.  ​ 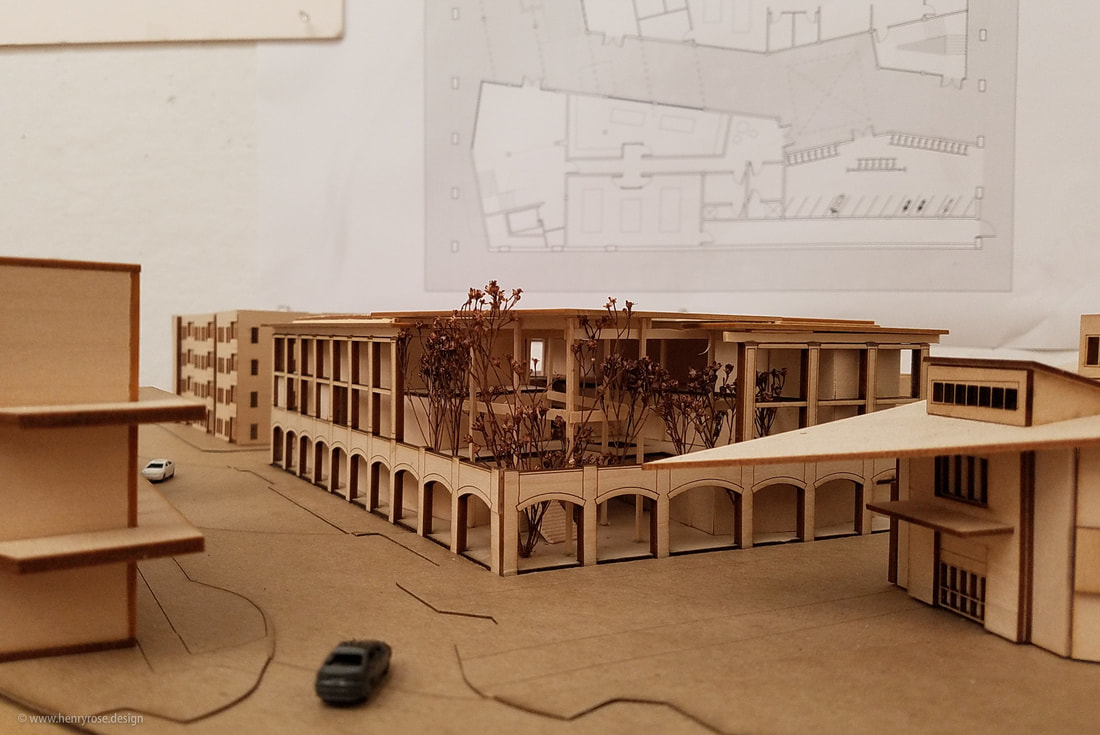 The most obvious solution is to use other buildings conjunctively to define unconditioned spaces. Below is a project I worked on with a classmate where we chose to subdivide two lots into four and turn the buildings toward the inside to create a courtyard. Naturally, the municipal street condition remains at the perimeter, but the interior problem at least is alleviated. Furthermore, by rotating the structures off the orthogonal site plan, view corridors were maintained even in tight quarters. The buildings thus face each other to contain the space without doing so directly, which I believe allows them fit more comfortably (as private residences) so close together.

This is a geometric solution to a social condition. And it is one that quickly begins to challenge the notion of private ownership so intrinsic to the American ethos, which, frankly, could be approached with a little more nuance than the generic strain of socialist antipathy admits. Buildings do not exist in isolation, but beyond fire code the public policies that regulate construction on private property act much as if they do. I grant that the issue is complex but the point is the built environment is both an effect and a cause in the cycle of social alienation. Buildings are deeply complicit in the communal behavior of human beings; the failure to heed this at the political level is an insidious cultural hazard.* ​ 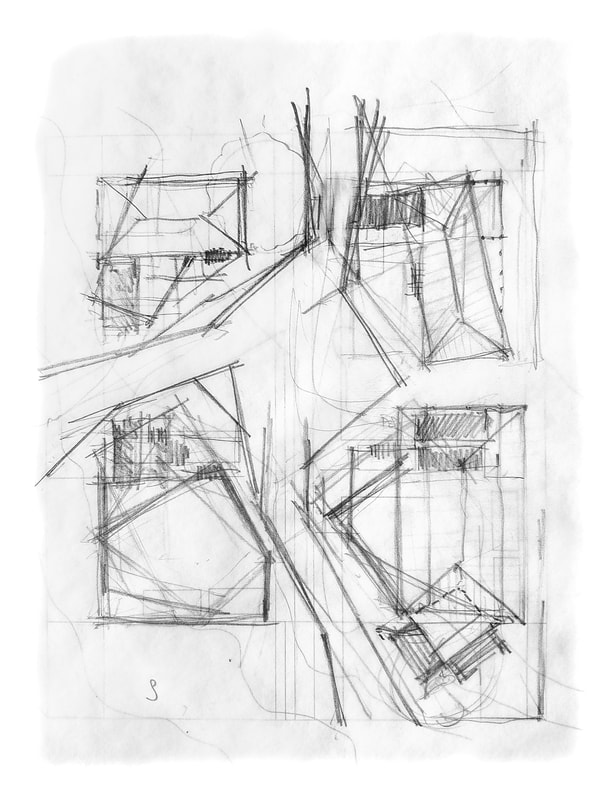 Breaking away from the orthogonal grid creates fascinating relationships. We explored one above primarily in the horizontal plane. Another that interests me also regards light but in the vertical axis, namely how the shift permits penetration through multiple stories of the building (visable in these early sketch models). Above is a parti diagram I developed whereby the unconditioned staircase jumps across the ground level passage over atrial bridges that permit movement between the two halves of conditioned space. Breaking away from the orthogonal grid (especially twice) is also structurally mad, I learned, if you want to maintain a semblance of order. I was not at all prepared for this challenge.  ​ 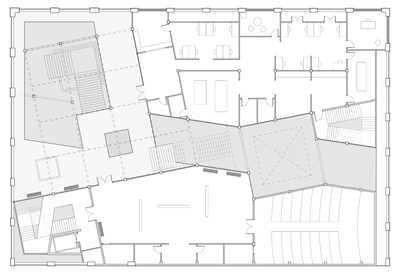 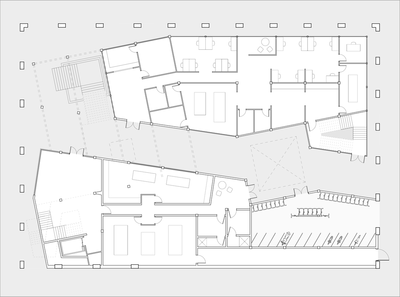 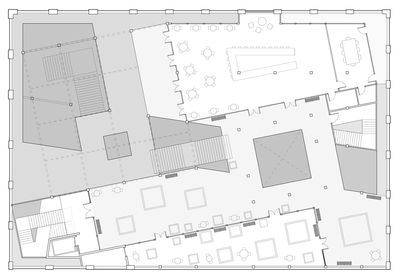 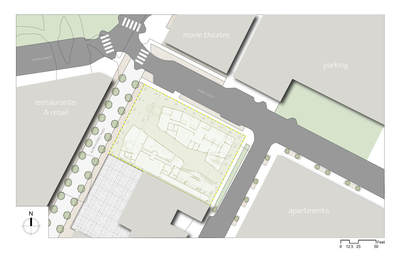 The other unique aspect of this building is its experimental double facade system.  The idea is to separate the solar load from the insulated envelope  — quite simply to shade the building, especially from the late, violent western sun which no roof overhang can combat — so that the same material does not have to perform both tasks. Without this air gap between, a normal wall system is continuously stressed by the conductive load applied by the sun. What is worse, glass, which we love so much, is a miserable insulator, with only the most extreme quadruple-paned systems achieving R-value equivalents of greater than 4, and typical double-pane IGU's coming in around half that. In comparison a two-dollar 6" fiberglass batt is already at R-19 even without the enclosing wall system. In hot climates, it would follow, glass-in-the-sun is just stupid, and patently uncreative.

The goal is to permit light while reflecting heat. This is the basic challenge of all insulated, inhabited structures.** The brise-soleil (exterior louver) is a classic solution. Additionally, there exists a panoply of ingenious materials and systems that are being developed to facilitate this exchange, many of which use mechanical, chemical or even biological mechanisms to modulate the solar energy to which they are incident.*** The trouble is that no matter how clever a system is, architecture makes a poor prototype upon which to deploy it.**** The structures are too big, too expensive and too enduring to warrant the risk. Thus I do not find that the primary obstacle is technological, but rather the inability to exploit technology in an architecturally relevant way. The problem, essentially, is to make architecture prototypically feasible.

To this end I devised an external system of bays into which could easily be installed new or existing, passive or active, chemical, biological or mechanical shading systems without compromising the integrity of the building's structure or aesthetics. The system I chose to represent in the model below was basic foliage (I imagine bamboo screens in easily serviceable trays) but the point is any number of things could be used. Different systems could be employed on different solar aspects, or even patched together on the same facade in mosaic or collage, behind all of which a lightweight glass storefront could be employed, happily unstressed. As the headquarters of the Austin Energy Green Building department it would be a beacon for innovation, even allowing the public to circulate along the open corridors between the two 'envelopes' to participate in the experiment. The building would be able to grow, to adapt, to remain relevant. ​ 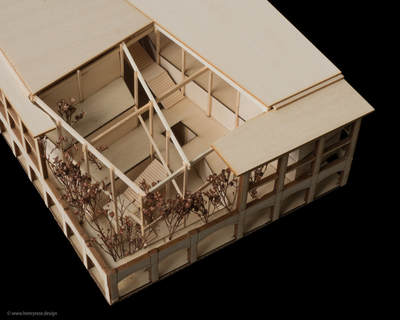 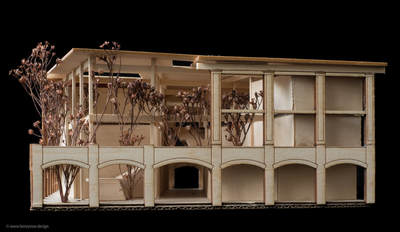 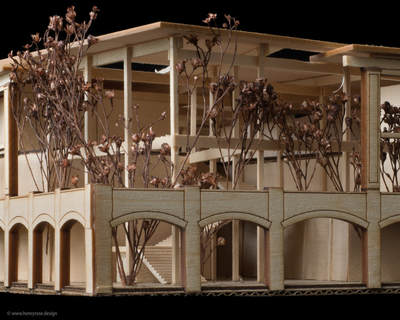 PROCESS: Despite what the photos below indicate the majority of my time was spent in Rhino, modeling in the digital environment. One of the downsides of this approach is that little evidence remains of the work other than screen shots. Below you can also see the formative sketch of a figure-eight staircase that circles in two directions, which I determined to be an interesting way to resolve the collision of the two twisted grids. At the other (east) end of the building I was able to use the stair landings in a more typical uni-directional staircase to bring the two irregular halves together. The foam models are early; you can see the development of the double-twisted grid as a strategy for opening up the corridor. What was apparent at this stage is that those terraces would be scorched from the west in this southern climate. Since the site begged for this orientation, it became apparent a vertical shading system was needed.
© A. Henry Rose, 2021. Excerpts and photos may be re-published provided that full and clear credit is given and directly linked to the original content.